What Jobs Can I Get with an Agile Project Management Qualification?

There are many positions available to candidates in possession of an Agile Project Management (AgilePM) qualifcation.  As you can see by the graph below, Agile’s popularity has steadily increased since 2005 to the point where now almost 30% of permanent IT jobs advertised in the UK are asking for this certification. 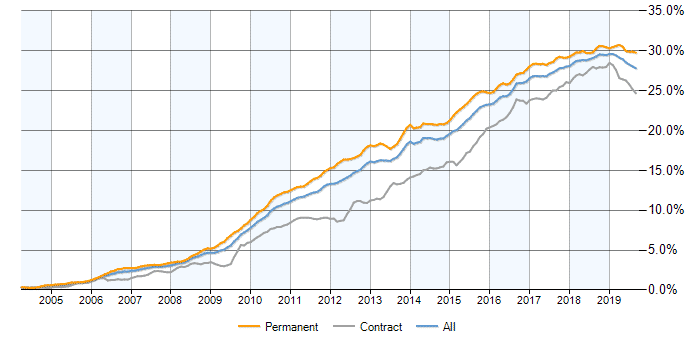 Job postings citing Agile Software Development as a percentage of all IT jobs advertised. Image Source

IT is not the only industry that asks for AgilePM.  As it becomes increasingly popular other industries such as finance, construction, marketing/advertising, event planning and product development are now using this methodology.  As such, AgilePM is a well sort after certification by employers and a valuable certification for candidates.  So, let’s have a look at some of the opportunities available…

For this post I have used the more popular job boards such as Indeed, Reed and CV Library.  I also looked at LinkedIn (270 positions), Technojobs (252 positions), CW Jobs (615 positions) and ITjobswatch.    On 23.09.2019 there were 1,225 permanent roles advertised on Indeed, 1,420 positions on Reed and CV Library boasted 651 positions.  However, ITjobswatch trumped them all with 6,145 positions being advertised.  It must be remembered, however, that some vacancies will have been advertised on more than one Job Board.  Even so, the amount of positions currently available is impressive and so too are most of the salaries.  Below is a graph showing the average salary distribution for the last 6 months up to 30.09.2019. Other Forms of Qualifications

I have only listed vacancies specifically asking for an AgilePM certification, but many of the higher paying vacancies ask for other qualifications too such as C++, Microsoft Project, Managing Successful Projects (MSP), ITIL, SQL, to name but a few.  There were also some that I looked at that asked for candidates to be educated to degree level.  Some positions asked for either AgilePM, Scrum Master or PRINCE2, so there are further opportunities here, but I have not included these in the table as I have specifically concentrated on those asking for AgilePM.

Whilst I have only included the most popular Agile job titles in the table below, there are many more positions that ask for an AgilePM certification such as Security Project Manager, Business Change Manager, Change and Release Manager and Data Centre Project Manager, to name but a few. 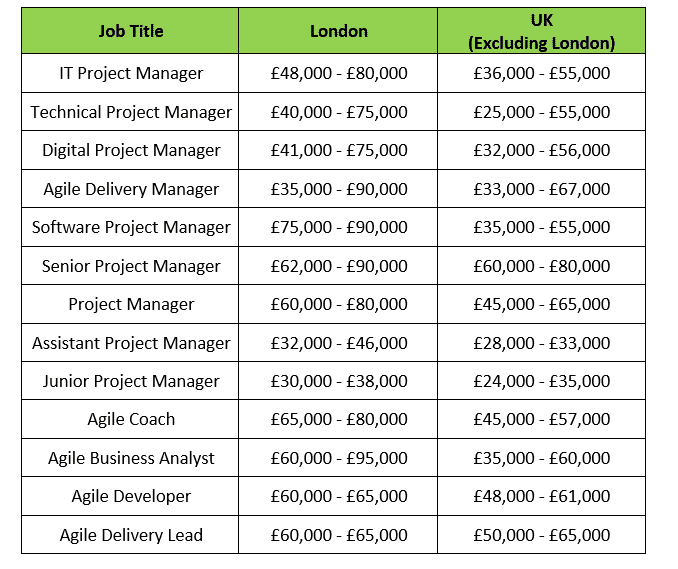 Most positions I looked at offered not only financial bonuses but also extras such as car allowance, medical insurance, pensions, free gym, life insurance and others too numerous to mention.

Adding to my own table of research, I found these average salaries for project manager roles on Checkasalary and thought it might be useful

I explained in my post What Jobs Can I Get with a PRINCE2 Qualification? that temporary contracts offering salaries calculated on a daily rate are somewhat higher paid, on average, than the more permanent positions.  Whilst these figures might be appealing, you must remember that there will be times when you are in between contracts and that there will also be times when contracts end prematurely.

If you wish to apply for a contractor position but want to know how it pays annually, then assuming you are going to take 20 days a year holiday, 8 Bank Holidays and not work weekends, your annual number of working days will be 233.  If you then multiply this number by the daily contractual rate, you will have your annual salary.  I took some average daily salaries that I found during my research and have created the table below, just to give you some idea.

All overseas positions that I looked at included bonus and benefits.  All companies pay for flights, but some also pay for accommodation and some even cover meals.  There were many positions available in many different countries; Spain, Germany, USA, but unfortunately the salaries were not specified.  However, I have included a few positions below that I could find salaries for as I thought you may be interested to know what was available overseas. I have included Programme Manager here as whilst the position does ask for a lot more than just Agile PM (not least of which is a degree in computer science or similar and fluency in French), I thought it worth showing the potential for career and salary progression.

I found one employment site that I thought might also be of interest.  It is strictly for the professional.  TopTal.com allows you to register and be head-hunted.  There is an extensive vetting process involved which includes communication and technical screening, but once registered, offers from around the world could flock to your email.

So, all this in mind, I hope that I have helped to answer the question of what jobs you can get with an AgilePM qualification and I wish you every success in your job-hunting.